Internet access continues to improve in Myanmar, as more users connect via smartphones with fast 4G service. The success of two foreign-owned mobile service providers has placed pressure on the state’s monopoly, and the government has responded by giving a mobile phone license to a military-owned conglomerate and restoring the state’s majority control over the mobile market.

While the government continues to refrain from applying direct limitations on content, self-censorship on a range of subjects including the military, corruption, and the Rohingya, remains high. Social media companies have responded to pressure by opaquely increasing content removals, which has removed legitimate content. Users are free to access the internet, but there is a lack of diversity in the ownership and content of online media outlets. Meanwhile, the government and military actively promote their own narratives online and reject much independent reporting as “fake news.”

Criminalisation of internet users persisted, including under several criminal defamation laws, while the government has hinted that a draft cybersecurity law could contain provisions punishing online criticism of the government. Intimidation of users remains common, through online surveillance carried out by the government and military, as well as harassment against those reporting on or discussing conflicts in Rakhine, Shan, and Kachin states online, in addition to users discussing gender and other so-called “sensitive” issues.

It includes updates on the following questions: 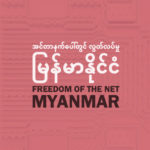